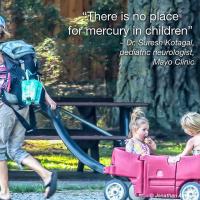 “The routine use in dentistry of silver amalgam fillings is the major source of toxicity in the human body.” Dr. Gary Verigin (biological dentist).

Scientific studies have concluded that amalgam is the source for more than two-thirds of the mercury in our human population. Mercury-based dental fillings often referred to as “silver” are, in fact, still one-half mercury.

Only one out of four consumers is generally aware of this.

Any kind of stimulation can cause amalgam fillings to release mercury - eating, drinking, brushing your teeth, grinding your teeth, chewing gum and so forth. The more acidic your body is, for example from carbonated soda pop drinks and strong acid-forming foods, the more these fillings will leech mercury.

Mercury is a neurotoxin, a toxin that targets the nervous system, preventing nerve cells from communicating effectively. Yet, nearly one out every two dentists is still placing amalgam fillings less than two inches away from your brain, the centre of your nervous system.

Who is vulnerable?
Most at risk from mercury toxicity are children, the fetuses of pregnant women, hypersensitive individuals, and people with kidney impairments. They are all particularly susceptible to the neurotoxic effects of dental mercury. Mercury from mothers’ amalgam fillings has a pathological effect on the development of the foetus. Difficult to believe, but some children are proving to be even more toxic than their parents.

“ … there are studies from world-renowned institutions that categorically show a cause-and-effect relationship between mercury and disease; this is particularly true of Alzheimer’s disease. Mercury is cytotoxic — i.e. it poisons cells. Why wouldn’t it make you sick? The list of problems mercury vapour can cause is endless. There is an extremely high incidence of depression, memory loss and behavioural problems including violent outbursts that can be explained by exposure to mercury vapour.” ( Life Extension Magazine May 2001.)

10 years later, the World Health Organization (WHO) reported that:

"Mercury is highly toxic and harmful to health. Approximately 80% of inhaled mercury vapor is absorbed in the blood through the lungs, causing damages to lungs, kidneys and the nervous, digestive, respiratory and immune systems. Health effects from excessive mercury exposure include tremors, impaired vision and hearing, paralysis, insomnia, emotional instability, developmental deficits during fetal development, and attention deficit and developmental delays during childhood.” (WHO - 2011 report: Future Use of Materials for Dental Restoration)

2001 -  US National Health and Nutrition Examination surveyed 31,000 adults and found that the number of dental fillings correlated to the incidence of cancer, mental conditions, thyroid conditions, neurological issues (including MS), diseases of the respiratory system, and diseases of the eye.

2009 - FDA (US) issued a new regulation placing dental amalgams into Class II (moderate risk) from Class I (low risk), allowing them to impose special controls and recommendations surrounding the use of amalgams.

2010 - FDA (US) advisory panel on dental amalgam warned against the use of amalgam in vulnerable populations and insisted that FDA had a duty to disclose amalgam’s risks to parents and consumers.

International reaction
“There is no safe level of mercury, and no one has actually shown that there is a safe level,” said Dr. Lars Friberg, Chief Adviser to the WHO on mercury safety.

Denmark, Sweden, and Norway - banned dental amalgam for environmental and health reasons. Italy and Australia have taken steps to reduce amalgam use.

Council of Europe - passed a resolution in 2011 calling on the nations to start "restricting or prohibiting the use of amalgams as dental fillings.”

World Health Organization (WHO) - released its report in 2011 on dental amalgam.

What you can do about it
The highest release of mercury is when from “silver fillings” are placed in and or removed from our mouths. Don’t automatically go to your dentist to have your fillings taken out. There is a very specific procedure used by biological dentists, specially trained to remove amalgam fillings. When in a weak and debilitated health state, be very careful about having your amalgam fillings removed.

Avoid the mistake I made 20 years ago by not visiting a biological dentist, in other words, a dentist who does not specialize in mercury removal. When amalgam fillings are removed, you can be exposed to a significant amount of mercury vapor. It's also for this reason that I strongly suggest you work on your health before having your fillings removed. Help your body before by supporting and assisting it to eliminate this neuro-toxin.

When Jonathan (my husband) had his amalgam fillings removed a few years ago, it was by a biological dentist, using air extractors operating constantly to prevent mercury vapours from accumulating. There were no after effects.

We have seen remarkable health recoveries when heavy metals are safely released.