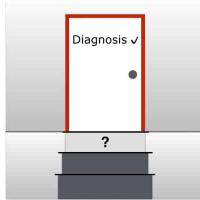 Have you ever been diagnosed with chronic pain? Did you experience little or no improvement, even though you tried various prescribed treatments?

“Physicians don’t look for environmental causes primarily because they have not been trained to do so” - Dr. Albert F. Robbins, DO of Boca Raton, Florida

Diagnosis today - the missing step
Think back for a moment to a time when you were ill. Probably, a diagnosis would have been the first step taken by your health care professional. Your condition was given a name, you received treatment, you followed a treatment plan, and your health was expected to improve. But did you find out the root cause of your illness? You may ask why that matters. Well, if your health did not improve for the better, or if the issue repeated itself, then it matters - the root cause must not have been treated.

Given the increased complexity of health issues today, is the conventional approach to diagnostics, with its inherent trial and error method, enough? In many cases, a condition can only be diagnosed and treated effectively after identifying the root cause. One root cause is becoming increasingly common today, and is quite problematic for conventional diagnostics since those in mainstream health care are not trained to consider it.
Dr. Eldon Haas, MD, recognizes that “the primary cause of disease is the accumulation of unnecessary wastes and poisons.”

Poisoning the body
When we hear of poisons, our thoughts may turn to murder mystery novels. What might be less obvious is that we could be unconsciously introducing poisons into our bodies each day, little by little. The result may not be so acute or dramatic, but the steady accumulation may still force the body into a state of overwhelm.

The “unnecessary wastes and poisons” that Dr. Haas refers to above are toxins, consisting of human-made chemicals, heavy metals, and excess acidity, substances that are all poisonous to the body. Toxicity refers to the degree to which toxins are poisoning the body.

Toxins weaken the body, preventing proper gland and organ functions, absorption of food, and the creation of energy. Inherent weaknesses in the body cause overwhelmed organs to deteriorate. The organs, unable to cope with the increased toxic load, begin to pass through several stages of failure, depending on the volume of toxicity and level of accumulation.

A well-known example of a disease related to toxicity is fibromyalgia. As Dr. Arlan Cage, ND explains: “Without exception, all fibromyalgia cases examined were found to have heavy metal toxicity, and in several cases, there was more than one heavy metal involved.” A further, more sobering development is the discovery that when two or more types of heavy metals, such as lead and mercury, are combined, the effect is exponentially increased.

“Combination of substances in toxicology can be greater than the sum of the parts: with lead and mercury, for instance, a toxicity rating of 1 for each mercury and lead equals not 2, but 60 – when combined.” - Dr. Hal Higgins, DDS, MS

Incomplete diagnosis = incomplete treatment
It is becoming clear to both scientists and healthcare professionals that toxicity can cause some serious problems. However, a disturbing and less obvious situation is also occurring: toxicity symptoms are being identified as those of well-known diseases and are treated with little positive effect.

Dr. Gary Kaplan of McLean, Virginia explains, “biotoxicity symptoms also can mimic those of certain autoimmune diseases, such as psoriatic arthritis, celiac disease, irritable bowel syndrome, and rheumatoid arthritis.” (Biotoxicity is a buildup of toxins in your body tissues.)

“The study of toxic metals is part of nutrition and toxicology, areas not emphasized in medical schools. For this reason, these important causes of disease are accorded little attention in conventional mainstream medicine” - Dr. Lawrence Wilson, MD of Prescott, Arizona

“Unfortunately, the majority of clinicians dealing with patients who have mental health issues are unlikely to suspect heavy metal toxicity as a cause of their patients’ problems, due to a general lack of knowledge of this subject in the medical community” - San Francisco Preventative Medical Group

A further complication is that treating diseases with medications, particularly multiple medications, may make the issue worse, as Dr. Charles Matthews, MD of North Carolina describes: “exposure in the environment to fumes of all kinds is a commonly known source, but not so commonly known is the use of over the counter medications.”

Toxicity - key researchers and doctors
Although not common knowledge within the healthcare community, many doctors, and other healthcare professionals already understand the significance of heavy metal toxicity. They are starting to incorporate heavy metal testing and toxicity reduction into their diagnosis and treatment processes. Additionally, institutions such as the Mayo Clinic are beginning to acknowledge the effect of toxicity.

Accepting new solutions
Unfortunately, new solutions to established health conditions can take several years to become adopted. For example, although the correct cure and effective treatment of duodenal ulcers were first discovered many years ago, relating to a bacterium overgrowth needing antibiotics, this new approach had to be debated for several decades before finally being taken on.

An Australian researcher deliberately triggered an onset of the condition by drinking a beaker full of bacteria in 1984 in order prove his findings, but it still took a further ten years before the treatments identified at that time became accepted by the mainstream health community.

Toxicity - a significant health issue
Perhaps the diagnostic process needs a third step. Let’s call this: Gaining insight into a person’s current health balance. This can be determined from their diet, lifestyle, environmental exposure, stress, and their ability to deal with the daily accumulation of toxicity,

“Our environment and lifestyle allow for heavy metals to make their way into our bodies. We can breathe them, eat them, drink them, and even absorb them through our skin.” Dr. Jason Godo, DC of Chicago, Illinois.

An extended diagnostic process may be able to catch factors affecting our health, those that the two-step ‘signs and symptoms’ diagnostic process does not reveal. A health care professional, by obtaining details about an individual's health balance, will discover whether that person is likely to have a significant level of accumulated toxins. Maybe they live or work in toxic environments, or maybe they simply follow an unhealthy diet. Whatever the toxicity factors, they need to be understood before treatment of the disease can be fully effective.

“The problem is, if an underlying cause of your pain or illness is heavy metal toxicity and your treatment plan does not include a detoxification regimen, your overall recovery is very likely to be incomplete and far slower than it needs to be.” Dr. Gary Kaplan of McLean, Virginia.

Testing for toxicity
This is the obvious solution, but toxicity can be a complex issue, testing can be expensive, and it is necessary to know what to test for. Prior knowledge of an individual’s background can help with this. (For example, heavy metals such as Mercury accumulate in the bones, and it is only by getting the bones to release it that the extent of accumulated Mercury can be determined. So it is essential to gain some indication that Mercury may be present before going to the trouble and expense of testing for it.)

The most practical first step in testing for toxicity is to understand more about people's current health balance. This can be achieved by identifying the various factors that affect them, to gain more insight into what toxins to test for. What better way than to obtain this kind of understanding than through the use of a questionnaire?

Is a step missing from your diagnosis?

For examples of how toxicity has frustrated the successful treatment of a well-known condition, see “Lyme disease - it’s official” and “Rheumatoid arthritis, toxicity problems?”

Learn about heavy metal testing, diagnosis, and treatment in "Heavy metals - what the doctors are saying."

For more about toxicity and the impact of mercury, see “Toxicity - a phantom disease?”